Houseplant of the month: Tillandsia 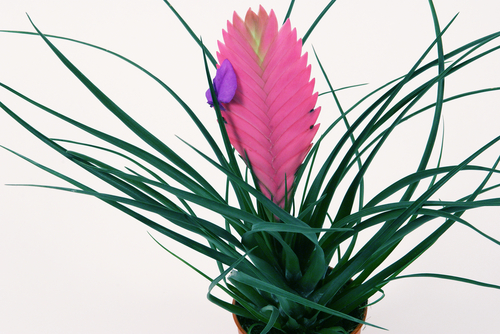 The Tillandsia is quite an interesting tropical treat. Most have only a few or no roots at all, but gather their nutrients from the air through their leaves. It is therefore that Tillandsias are also known as ‘Air Plants’. Most Tillandsias are epiphytes or lithophytes: they grow on trees or rocks.

Tillandsia: an odd and colourful explosion

The tillandsia grows in the Southern part of North-Amerika, Central- and South-America in mountains, forests and deserts. Whilst there is quite some variety in form and size, Tillandsias often have breath-taking bright colours such as red, orange, pink and purple. Not only when flowering: the bracts (leaves) may also turn into one of these colours before flowering too. It is thus not very surprising that the bracts are often considered as being the flower. The actual flowers, however, are rather tiny. Whilst this makes the shape of the Tillandsia to be quite astonishing too, the greenery of the plant grow into odd, unearthly even, shapes as well.

Although there are some differences in needs between species of Tillandsia, they are easy to take care of and very adaptive. It is advised to spray the plants frequently, depending on their location within the house. Due to its tropical roots, it can easily handle high temperatures and humidity. Additionally, as most species have only a few or no roots and get nutrition from the air with their leaves, you don’t need to place them in soil or a pot. This offers endless possibilities. A few ideas:

Looking after the Tillandsia

The most important things for the Tillandsia are water, light and air. As long as this is present, the Tillandsia will easily keep its beauty for up to 6 months. The lighter the colour (grey) of the Tillandsia, the better they can handle sunlight. To give them some extra air, take them outside on a sunny day. Lastly, a real treat for the Tillandsia is to spray it with rainwater every once in a while, providing extra nutrients.